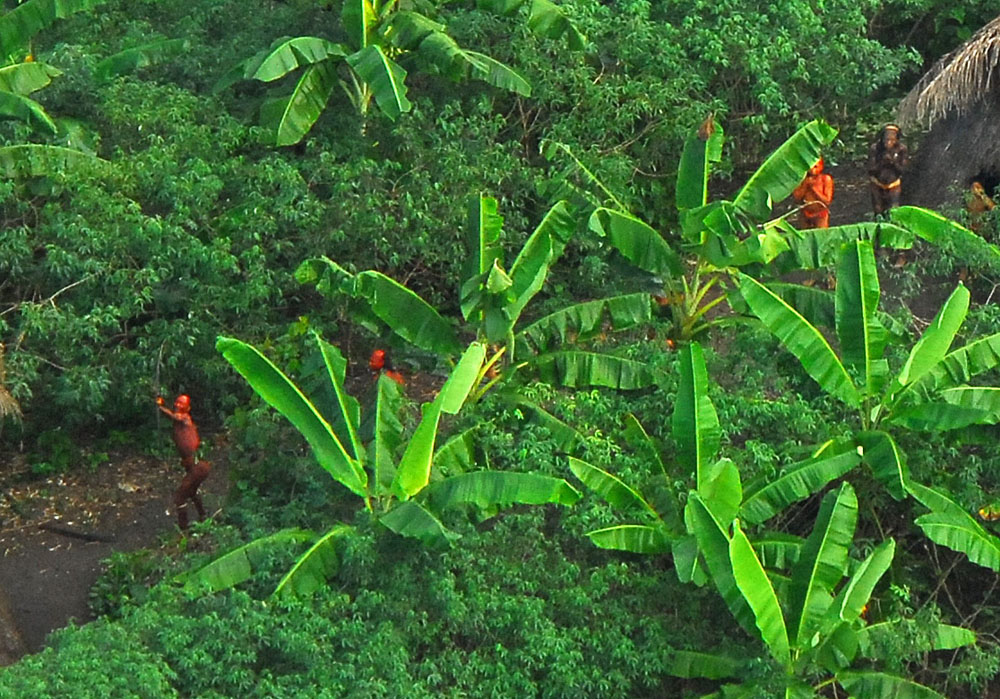 A series of new aerial photographs of the isolated Moxihatetema tribe in the Amazon highlight the importance of protecting their territory from the growing threat of illegal mining.

The images below show us members of the Moxihatetema tribe posted inside a communal circular structure called shabono. These photos were taken a few weeks ago in the Yanomami reserve, near the border separating Brazil from Venezuela. The Moxihatetema tribe, which had not been seen in more than a year, is one of three Yanomami groups in the area « monitored » from a distance to avoid outside approaches. This group of indigenous people has worried activists for many years following the gradual invasion of garimpeirosillegal miners.

Taken last September during aerial surveillance of illegal miners’ camps, these photos combine relief and concern. We see the members of the tribe (who seem in good health) posted in the center of a collective house made of wood and covered with palm leaves. This circular house where dances and ceremonies take place is generally built in clearings of the tropical forest and each family has its own hearth around which its members sleep in hammocks. But judging by these images, the Moxihatetema seem to have moved on and are now closer than ever to disease-carrying miners who contaminate water sources with mercury and use firearms. Several deadly clashes have indeed already taken place in the past. In 1993, the Haximu massacre had in particular made 16 victims, including children among the members of the tribe who saw their houses burning before their eyes.

According to Fiona Watson, of Survival International, there seem to be two more thatch panels than in the past, suggesting that the tribe has grown in size. Good news for the activist who does not forget to recall that subsidies intended for the protection of indigenous tribes have recently decreased following budget cuts. The Indians were indeed the first affected by the austerity measures introduced by Brazilian President Michel Temer.

Unfortunately, the situation is not expected to improve for the natives, the recession being felt more and more in the country whose congress is hostile to native rights. This year, the budget of Funai, a Brazilian government agency that develops and implements policies relating to indigenous peoples, has been cut by 37.7%. And further budget cuts are already planned for 2017.

The release of the photographs could be seen as a violation of the privacy of this isolated community, but the researchers nevertheless hope for widespread awareness of the threats they face and the need for more drastic control of mining. illegal in the area.

» These extraordinary images are further proof of the existence of these uncontacted Indians », recalls Stephen Corry, director of Survival International.  » It is obvious that they are perfectly capable of living outside the notions of « progress » and « development ».”. All isolated indigenous peoples cannot cope unless their territories are protected. We do everything we can to secure their land, and give them a chance to determine their own future. « .