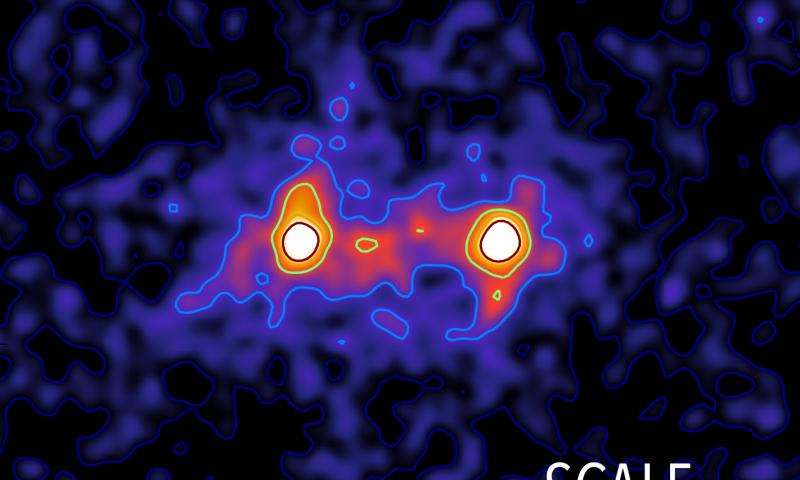 A team of researchers from the University of Waterloo claim to have been able to capture the first composite image of a bridge of matter that connects galaxies together. The results of this study have been published in the Monthly Notices of the Royal Astronomical Society.

The composite image combines a number of individual images and here confirms predictions that the galaxies are tied together in a gigantic cosmic web. If you observe indeed the Universe with height, a lot of height, the galaxies are concentrated there in supercluster and are aligned in immense filaments which extend over millions of light-years. It is these filaments that also delineate the immense voids in the cosmos. The landscape is therefore similar to a kind of cosmic web where the galaxies are distributed not uniformly, but along these cosmic highways. But what is this matter that seems to hold the galaxies together made of?

The researchers here are only guessing, but some are already thinking of dark matter, this hypothetical matter thought to make up about 25% of the Universe.  » For decades, researchers have predicted the existence of dark matter filaments between galaxies that act as a band-like superstructure linking galaxies together. said Mike Hudson, professor of astronomy at the University of Waterloo, who was involved in the study.  » This image takes us far beyond expectations, to something we can neither see nor measure. « .

As part of their research, Hudson and his team used the well-known technique of gravitational lensing which makes it possible to visualize distant galaxies, slightly deformed under the influence of an invisible mass located in the foreground like a planet, a black hole, or in this case, possibly dark matter. The researchers say they have captured images of more than 23,000 galaxies, some located up to 4.5 billion light-years from Earth to create a composite image or map that shows us the presence of matter between each of the galaxies. . The results also show that the material filament bridge is stronger between systems captured within 40 million light-years.

» By using this technique, we are not only able to see and confirm the existence of these filaments of matter (black ?) in the universe, but we are also able to « measure » these filaments which connect the galaxies “, conclude the researchers.