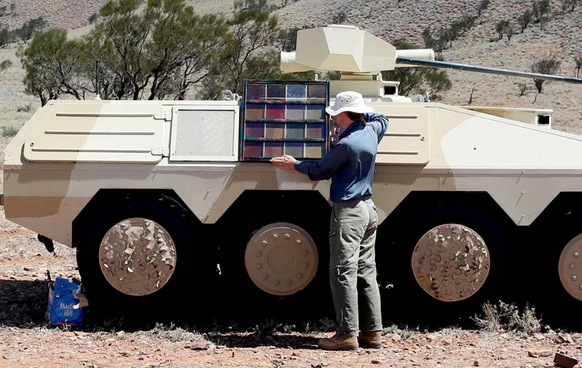 During the Land Forces Conference held in Adelaide, Australia, from September 6 to 8, a team of researchers from the University of South Australia presented a concept that caught our attention, a chameleon tank , able to change its camouflage depending on its surroundings.

Making camouflages, and in particular those of military tanks, adaptable, represents one of the Holy Grails of the military sector, since it would prevent detection by the human eye, the main objective in deceiving the adversary. Indeed, current camouflage technology has limitations, whether used to blend into a forest, desert or snowy backdrop, since these varieties of camouflage are static. Thus, managing to develop a camouflage that adapts in real time would make it possible to have the advantage of evolving in all of these environments.

It was therefore researchers from the Future Industries Institute at the University of South Australia who worked on the development of adaptive camouflage using materials known as conductive polymers. These conductive polymers carry electricity, but are also sensitive to variations in intensity. Thus, when they are spread out on a surface and surrounded by electrolytes, their color changes when the current passes through them. Here, the different shades of camouflage will be obtained by using several varieties of polymers.

The conductive polymers and electrolyte will be housed in a transparent sandwich structure (the « electrochrome » cell) which is sealed at the edges to cover the different sides of the vehicle. Different sensors will be responsible for detecting the immediate environment to transmit information and adapt the camouflage to it, instantly. The key here lies in the lightness and robustness of these electrochromic cells. While it is reasonable to assume that they will be able to withstand temperatures between -40°C and 80°C, which is already the case for parts in the automotive industry, they will also have to withstand shocks, damage abrasion and be UV stable, as project member Peter Murphy told New Atlas magazine.