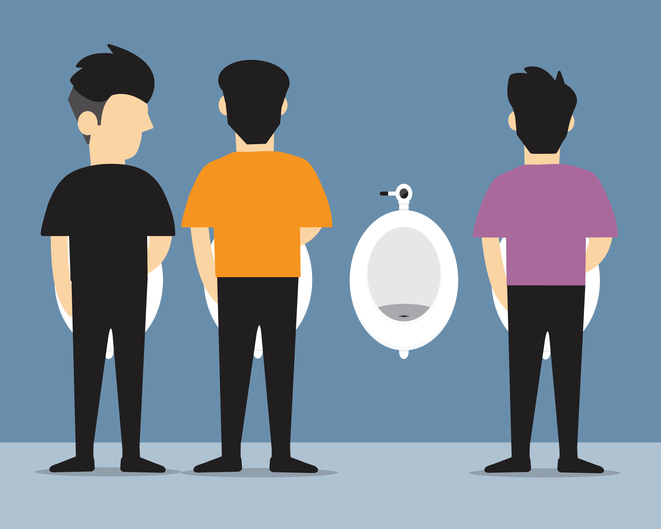 Here is a real existential question! You enter a public bathroom with a real desire to urinate, but nothing helps, you leave without having fulfilled your need. Do you suffer from “shy bladder”?

It is a real evil or rather a phobia. Indeed, the “shy bladder” syndrome, also called paruresis in medical jargon, affects many more people than we think. This phobia occurs when we are about to urinate, but one or more people can see or hear us or when we imagine being surprised.

There are different categories of people affected, but all can urinate quietly at home. In some people, this syndrome is punctual, it’s a bit “sometimes it works and sometimes it doesn’t”. For others, it may be temporary and disappear as quickly as it happened. Finally, there are individuals for whom this phobia becomes a serious problem that worsens over time. Indeed, these can be subject to quite substantial social repercussions.

These people will then avoid going out in public, traveling or even changing their practices relating to the simple fact of drinking outside their home, so as not to want to urinate. Sometimes, these individuals cannot do otherwise and are able to walk hundreds of meters in the forest or in the open field to “be quiet”. On the plane, on the other hand, the ordeal takes another form, that of an interminable wait synonymous with suffering.

MotherBoard magazine interviewed Steven Soifer, professor of social action at the University of Memphis (USA) and director of the International Paruresis Association (IPA). This expert advises people who experience this phobia badly and tries to help them.

“When we talk about paruresis, we often hear ourselves answering stuff like “Carry your balls”, we get called a jerk. Most people don’t understand. When in fact, it happens to many people, at least once. Concretely, if you cannot see or hear the other, even if he is there, it does not bother you. Studies show that the closer the person is to you, the more difficult it is to urinate. »

A few jumbled details on paruresis

Men are much more affected than women, probably because they do not confront the urinals. This phobia often develops from adolescence and can continue until death since some people avoid public toilets all their lives. In addition, the difficulty of urinating is proportional to the distance separating the person from another individual.

Officially, men would be affected at a rate of 1 to 25%, a range far too wide for Steven Soifer who estimates this number at 7%. Reported to the French population, this ratio gives a rather incredible result: this represents a figure of 4.6 million French people, twice the population of Paris. And you, are you part of it?