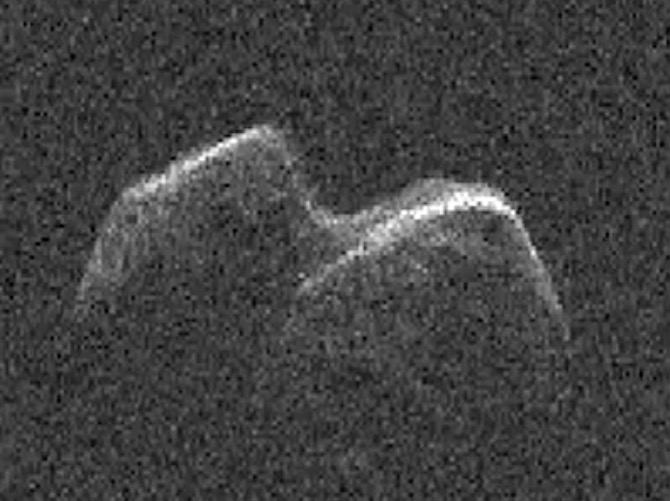 Asteroid 2014-JO25 passed Earth last Wednesday and is now moving away as expected. What was less expected was its size since it was twice NASA’s estimates.

On Wednesday, April 19, 2017, asteroid 2014-JO25 passed the Earth’s periphery, about 1.8 million kilometers from our planet at its closest pass, about five times the distance that separates Earth from the Moon. And if according to the first estimates of NASA, it was a pebble of about 650 meters in diameter which was to be expected, it is finally a size twice as large as the asteroid measured with 1.3 kilometers.

Its shape, made up of two lobes joined by a thinner central part, was indeed the one that could be expected, as can be seen in the images taken by NASA thanks to its radar antennas located in California, which should be prove rich in lessons for the astronomers of the American space agency.

We have to go back thirteen years, in 2004, to find traces of the passage of a large asteroid on the periphery of the earth. It was the asteroid Toutatis. This one was even bigger than 2014-JO25 since its diameter was between four and five kilometers and its passage was much closer to us.

Both asteroids fall into the PHA category, for potentially hazardous asteroids, a category which implies that the object in question is more than a kilometer wide and its distance from Earth is less than seven million kilometers. .

From now on, it will be necessary to wait ten years, in 2027, for a new passage of an asteroid of such a size at a distance considered as close to our planet.