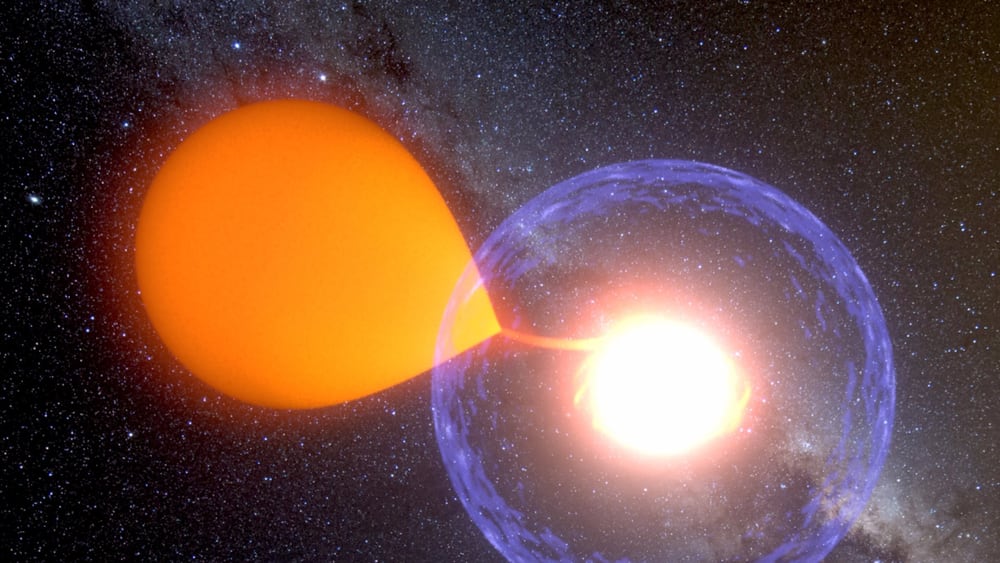 Nova Centauri 2009 erupted, as its name suggests, in 2009, but astronomers at the University of Warsaw had been tracking its source star since 2003. Collecting data for several years before and after the eruption of the star, the researchers were able to study the evolution of this type of nova, giving credence to the « hibernation theory ».

Astrophysicists believe that around 50 novae occur each year in the Milky Way. However, we only observe a few of them, because, generally, the clouds of dust and gas of the Galaxy hide them from us.

Unlike supernovae, novae are explosions that do not necessarily lead to the death of their stellar parents, or produce neutron stars or black holes. Here, it all starts with a white dwarf in a binary system that sips hydrogen and helium from its companion star. This process continues until the white dwarf reaches a point of critical mass, after which a dramatic and inevitable thermonuclear flare occurs. The star then suddenly becomes extremely bright – its luminosity can be multiplied by 10,000 for a few days. But the most fascinating thing about novas is that the process can be repeated: they are recurrent.

« These are the brightest and most frequent stellar flares in the galaxy, and they are often visible to the naked eye, » said Przemek Mróz, lead author of the new study, which has been monitoring for several years. (2003 to 2016) of the variable star V1213 Centauri, located about 23,000 light-years from the Solar System, in the constellation Centaurus. By observing V1213 Centauri, the researchers wanted to test a theory, called « the hibernation model », concerning the periodicity of novae.

According to the researchers, the images collected between 2003 and 2016 present direct evidence of a transfer of stellar matter, represented by small « peaks » of luminosity corresponding to mini explosions, before the real explosion of the nova, which took place on May 8, 2009.

A spike in brightness was then observed, suggesting that the white dwarf increased the rate at which it fed on its companion star, behavior consistent with predictions made under the hibernation model for classical nova systems. .

If the star follows the path described in this hibernation theory, it is likely that over the next decade the luminosity of the system will gradually fade, along with declines in mass transfer rates. It is also predicted that following this period of activity, the star will enter a phase of hibernation lasting for thousands of years. When it wakes up, the star will then experience a new cycle, before exploding, again and again…

This therefore accredits the hibernation model for novae and makes V1213 an excellent laboratory to test our theories on stellar explosions in binary systems. Understanding the evolution of the mass transfer rate can indeed help astronomers predict when a nova might erupt.