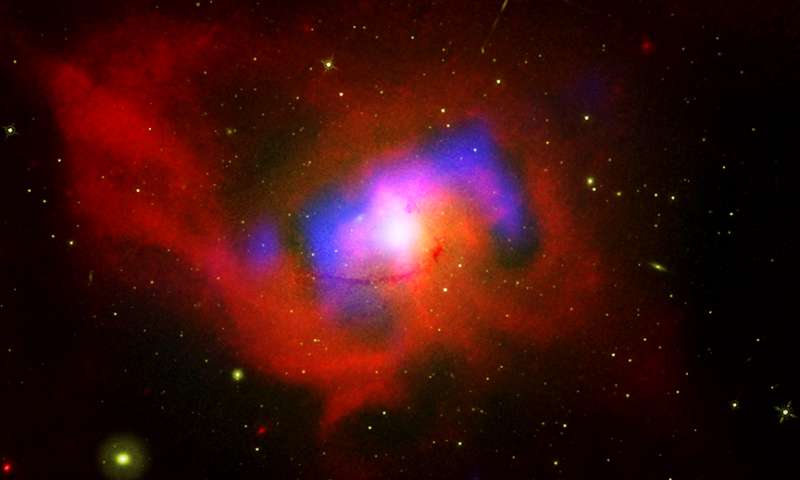 New observations from NASA’s Chandra X-ray Observatory reveal a galaxy eaten away from within by a supermassive black hole that sucks in surrounding matter, acting like a regularly beating heart.

Recent observations from the Hubble Space Telescope revealed a few weeks ago in detail the complex structure of the galaxy NGC 4696, located about 150 million light-years away in the Constellation Centaurus, containing hundreds of galaxies. Enveloped in a system of dark, swirling filaments, this galaxy, the largest and brightest of its « cluster », is actually eaten away from within by a supermassive black hole. New data returned by NASA’s Chandra X-ray Observatory combined with observations from the Very Large Array telescope and Hubble allow us today to learn more about this cosmic ogre acting as a heart that pumps blood (the matter) from the surrounding galaxies to reject part of it outward through cosmic arteries.

Repeated bursts of energetic particles in jets pulsing from the black hole have indeed been detected at the center of NGC 4696. Researchers led by Jeremy Sanders of the Max Planck Institute in Germany report that these bursts create vast cavities of gases heated to millions of degrees that pierce the space between galaxies at speeds close to the speed of light. These bursts also create shock waves similar to the sonic “booms” produced on Earth by airplanes at very high speeds. In total, the researchers identified nine cavities spanning nearly 122,000 light-years away.

The researchers estimate that these bursts take place every five to ten million years and underline the fact that in addition to these very divergent time scales, these rhythms differ in particular from the beats of the human heart which generally occur at regular intervals. At the same time, the energy produced by the black hole throws the heavier elements like hydrogen and helium generated in the explosions of supernova towards the outside of the galaxy. Maintained at extremely high temperatures, these heavy elements cannot cool down, thus preventing a large number of stars from forming. Visually stunning, NGC 4696 is actually a dying star system eaten away from within by its black hole.