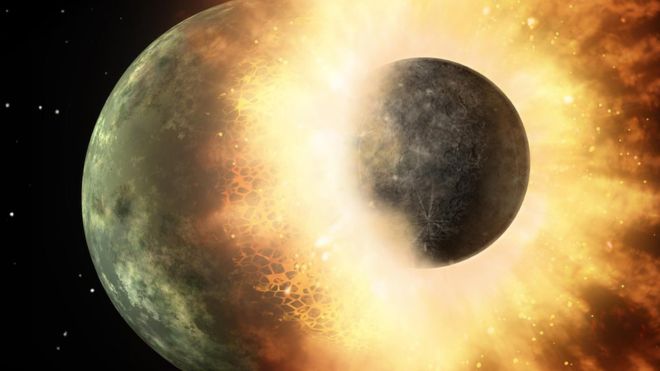 A recent study suggests that almost all of the carbon that sustains life on Earth could have come from a collision about 4.4 billion years ago between Earth and an embryonic planet similar to Mercury.

Carbon is the key ingredient for all life on our planet. But how did the Earth acquire its “volatile elements”? In a recent study published in the journal Nature Geoscience, Rajdeep Dasgupta and his colleagues offer a new answer to a long-debated geological question: how could carbon-based life have developed on Earth, given that most part of the planet’s carbon should have boiled off in the millions of years after the planet was formed?

The team now argues that the collision between Earth and an embryonic planet the size of Mercury could provide us with the answer.

The Earth’s core, mostly made of iron, makes up about one-third of the planet’s mass. Roughly, the Earth’s mantle represents two-thirds and extends almost 2500 kilometers below the surface. The crust and atmosphere are so thin that they make up less than 1 percent of the planet’s total mass. We also know that the Earth’s mantle, atmosphere and crust are constantly exchanging elements, including the volatile elements necessary for life.

If the initial carbon supply evaporated into space, or got stuck in the core during the first 100 million years of our good old Earth, hence the carbon found in the mantle and the biosphere come from?

« A popular idea is that the volatile elements such as carbon, sulfur, nitrogen and hydrogen were added after the Earth’s core had finished forming, » says one of the researchers. An extraterrestrial source. « All these elements, which fell to Earth on the backs of meteorites and comets more than 100 million years after the formation of the solar system, would therefore have avoided the intense heat of the ocean of magma which covered the Earth at that time. continues the researcher.

“The problem with this idea is that although it can account for the abundance of many of these elements, there are no known meteorites that could produce the ratio of volatile elements in the rocky mantle of our planet”.

By recreating the high pressure and high temperature conditions that plagued deep inside the Earth, and other rocky planets, the researchers nevertheless found that one scenario could reconcile the abundance of carbon on Earth: the collision with an embryonic planet like Mercury, which would have been absorbed by the Earth, at the beginning of its history.

‘Because it is a massive body, the carbon-rich mantle would then have mixed with Earth’s mantle,’ said Dr Dasgupta. In an excess of cannibalism, the Earth would therefore have absorbed from this planet the volatile elements necessary for life.