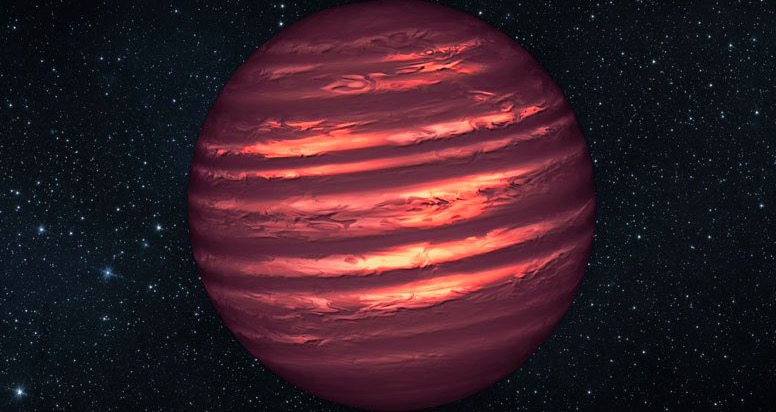 A team of astronomers announces that they have identified the most massive and “purest” brown dwarf (a “failed star”) ever discovered. It is almost entirely composed of pure hydrogen and helium.

We know that there are a plethora of objects which are neither really stars nor really planets and which are called brown dwarfs. They are sometimes also called « failed stars » like Jupiter. This unflattering name is justified by the fact that although they are very mainly composed of gas like stars, these objects are not massive enough for the internal temperatures to allow thermonuclear fusion reactions which allow the stars to « shine » and to release energy. Nevertheless, some of these « failed stars » may well surprise us. This is notably the case for SDSS J0104+1535.

SDSS J0104+1535 is an amazing celestial body that lies in the outer and most distant parts of our galaxy some 750 light years from Earth. With an estimated mass of around 90 times that of Jupiter, the object is distinguished in particular by its incredible “purity”, being composed of 99.99% hydrogen and helium. According to the researchers, such a percentage of hydrogen and helium combined with the absence of metallic elements among its gases make SDSS J0104+1535 a body about 250 times purer than our Sun. Astronomers have never observed such a phenomenon.

Massive and of exceptional purity, SDSS J0104+1535 would also have formed around 10 billion years ago, which would place this object among the oldest brown dwarfs ever discovered. Before its discovery, astronomers were unaware that such objects could form from such a percentage of hydrogen and helium, but given the number of brown dwarfs identified in our Milky Way alone, SDSS J0104+1535 does not could be the tree that hides the forest.

Brown dwarfs have definitely not finished surprising us and are of increasing interest to astronomers, especially astrobiologists. There are indeed billions of brown dwarfs in our galaxy. Several thousand would not even be in orbit around a sun and according to recent calculations made by researchers at the University of Edinburgh in the United Kingdom, some of these celestial objects several times more massive than Jupiter would be quite warm to have surface temperatures similar to those of Earth. This could allow life to develop there.