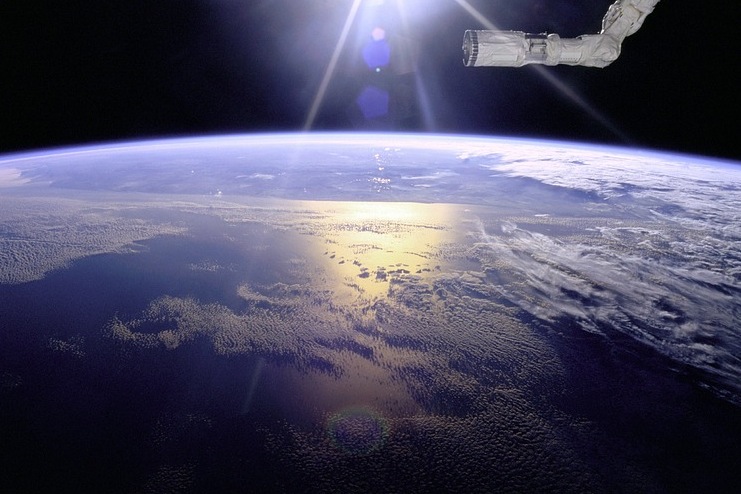 The next time you’re asked about the largest ocean, point your finger at Jupiter. With its 1,400,000,000 km3 of water (1 m3 of water represents 1000 liters), the Earth indeed pales in comparison to the other oceanic worlds of our Solar System.

Europa, one of Jupiter’s many moons approaching the size of our own Moon, likely conceals an underground ocean containing twice as much water as all of Earth’s oceans combined. Yet not even Europa rivals Ganymede, the largest moon in the Solar System (and the only one with its own magnetic field). According to the researchers, it would contain more than 30 times the amount of water present on Earth, in the form of liquid and ice. The researchers believe that a gigantic salty ocean would be sandwiched between an inner and outer layer of rock. There could even be multiple oceans sandwiched between multiple layers of ice. A huge Club Sandwich then.

And scientists keep finding more water everywhere they look. On September 28, researchers reported that Dione — a small moon of Saturn — likely contained an underground ocean, too.

To try to see a little more clearly, the site Business Insider recently reached out to Steve Vance, the planetary scientist at NASA’s Jet Propulsion Laboratory who crunched the infographic numbers. The graph below therefore compares the plausible volumes of water to date (both in liquid and solid form) for the nine verified ocean worlds in the Solar System.

As you can see, Earth only ranks 7th in the Solar System, ahead of Dione and Enceladus which are both moons of Saturn. The palm goes to Ganymede with a radius of water of 1,131 km for a total radius of 2,631 km, followed closely by Titan, the largest moon of Saturn, and Callisto, moon of Jupiter and third largest moon in the Solar system.

Note that Mimas, a moon of Saturn, and Ceres, the largest asteroid in the solar system, are also considered to be bodies with oceans contained in their basement – ​​but scientists still lack data to assess their exact sizes. .