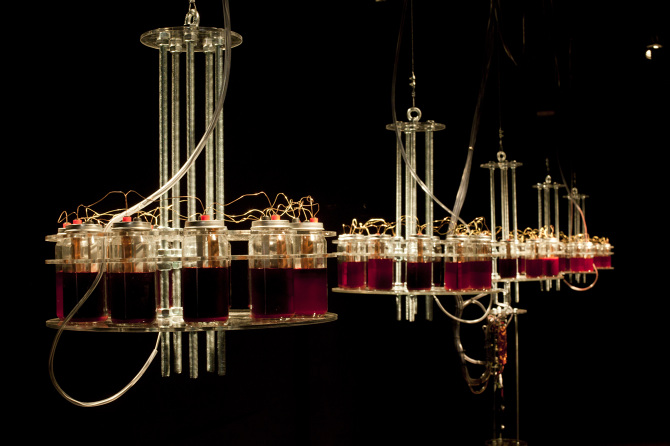 This rather special Russian musician has developed a kind of musical instrument in which he placed 4.5 liters of his own blood, which is approximately the equivalent of the quantity contained in a human body! But why did such a thing?

Dmitriy Morozov, known under the pseudonym::vtol::, was very patient in his work called “Until I die”. Indeed, the latter took 18 months to collect and store 4.5 liters of his blood in order to feed a synthesizer broadcasting sounds through speakers. The blood was mixed with distilled water as well as preservatives such as sodium citrate and glucose.

The liquid obtained delivers a direct current allowing the supply of batteries which in turn generate the audible sounds on the speakers. However, all this is not intended to make you dance! Indeed, the macabre character is as present in the sounds produced as in the installation itself.

Dmitriy Morozov said « be one » with his invention that needs his “vital source for creating electronic sounds”. The artist even describes his creation as « metaphysical construction between man and machine, rather than between human beings ».

These “bloodthirsty” works recall those of another Russian artist: Andreï Molodkin. The latter is at the origin of the work Immigrant Blood, presented in Paris in 2013, which is none other than the transparent bust of a Marianne in which the blood of asylum seekers was injected, quite a symbol.

As for Dmitriy Morozov, it is not a first attempt when it comes to sounds and the human body. In 2014, the artist had already created an exoskeleton-like machine that had the ability to play music by interpreting tattoos as a score.

Here is a demonstration of the work Until I die :