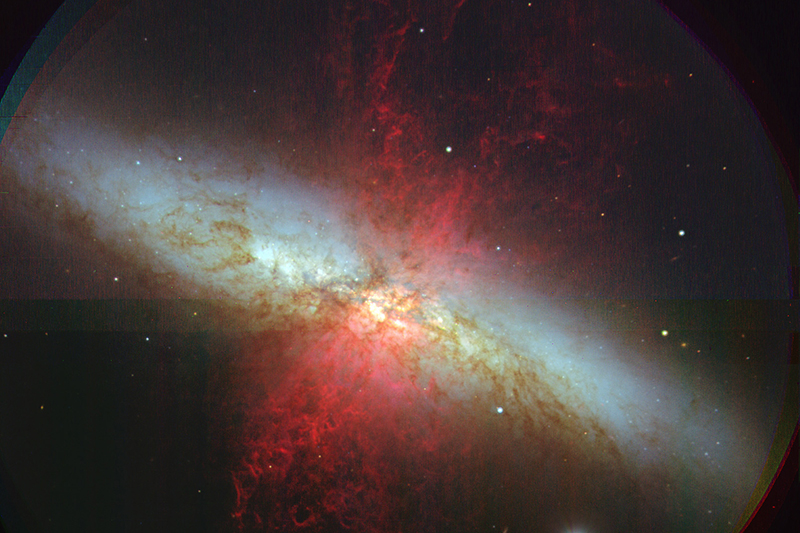 The Cigar Galaxy, or Messier 82, is five times brighter than the Milky Way due to a high rate of star formation that is causing it to gradually empty of gas. At this rate, it only has eight million years left.

Located 12 million light-years from us, in the famous constellation of the Big Dipper, is the Cigar Galaxy, or Messier 82. But the beauty is not alone. In its cosmic entourage is another spiral galaxy, M 81, the origin of the turmoil of the Cigar galaxy. A few hundred million years ago, the two galaxies indeed crossed paths and M 82 has kept its after-effects. Galaxy M82 is five times brighter than the Milky Way today, as it is the site of a burst of new star formation.

The problem is that this rate of star formation is so high that it would quickly lead to the conversion of all the gas in these galaxies into stars if it continued. In an article published on arXiv, a team of researchers led by John Chisholm of the University of Wisconsin-Madison and Satoki Matsushita of Academia Sinica in Taiwan calculated that about thirteen solar masses are converted into new stars, and seventeen others are blasted out of the galaxy by the blast from supernovae explosions of newly formed massive stars. Continuing at this rate, M82 could be gassed out in just eight million years – in the blink of an eye, cosmically speaking. She is therefore the victim of a sort of hemorrhage of gas.

Giant spiral galaxies like the Milky Way will one day also face this kind of problem, but less pressing. Astronomers estimate that most of these galaxies will run out of gas within 1 to 2 billion years.

The Milky Way is not concerned, because it seems to accrete enough gas for the moment, at least from the Magellanic Clouds, two dwarf galaxies close to ours. But in four billion years, the Milky Way is expected to collide with the Andromeda Galaxy, which should change the game.