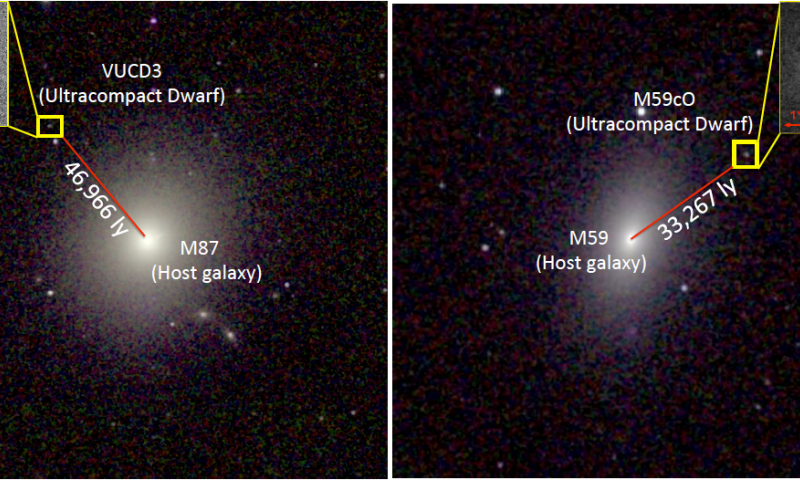 A few days ago, this same group of astronomers announced in The Astrophysical Journal that they had discovered two dwarf galaxies, this time ultra-compact with supermassive black holes at their center. The discovery suggests that these black holes lurk at the center of most such objects and could potentially double the number of known supermassive black holes in the universe. These two black holes make up a high percentage of their respective galaxy’s total mass, supporting the theory that dwarf galaxies are remnants of massive galaxies that have been torn apart by larger galaxies.

» We still don’t fully understand how galaxies form and evolve over time. But these objects can tell us how galaxies merge and collide says Chris Ahn, PhD candidate in the Department of Physics and Astronomy and lead author of the study.  » Part of the centers of all galaxies may be made up of these ultra-compact galaxies stripped of their outer parts millions of years ago « .

These two ultra-compact dwarf galaxies dubbed VUCD3 and M59cO orbit more massive galaxies in the Virgo galaxy cluster, located about 80 million light-years away, which has about 2,000 galaxies (90% of them they are dwarf galaxies). The researchers estimate that the first black hole (VUCD3) has a mass equivalent to about 4.4 million suns, which is about 13% of the total mass of its galaxy. The second black hole (M59cO) has a mass of about 5.8 million suns, or about 18% of the total mass of its galaxy. By comparison, the monstrous black hole at the center of the Milky Way has a mass of 4 million suns, but is less than 0.01% of the galaxy’s total mass.

In other words, these ultra-compact dwarfs are only about 0.1% the size of the Milky Way, but host supermassive black holes that are much more massive than the black hole at the center of our own galaxy.