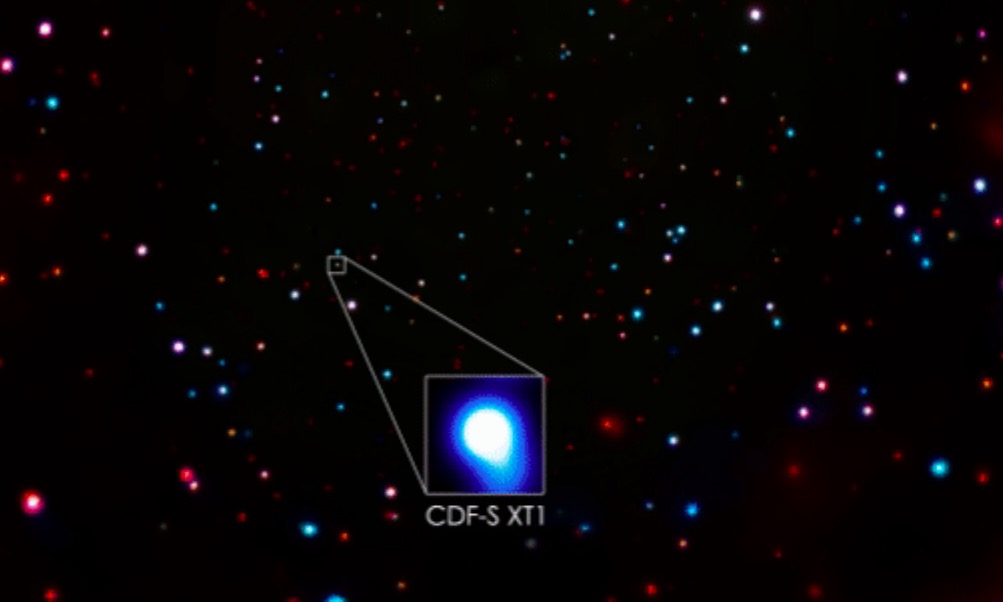 A mysterious and gigantic explosion has just been detected by a team of astronomers from NASA’s Chandra X-Ray Observatory who were probing the deepest X-ray image ever obtained. This source emanates from a destructive event, but never seen before according to the researchers.

Welcome 10.7 billion light-years away, to a galaxy far, far away. A priori, this one is nothing exceptional, but in October 2014, it suddenly became at least a thousand times brighter for a few hours, before disappearing again into oblivion. The problem is that no phenomenon known to scientists can explain such a burst.

» We were able to observe a whole new type of cataclysmic event “, declared a few days ago the astrophysicist Kevin Schawinski, of the EPF of Zurich in Switzerland.  » The mysterious explosion was so powerful that for a few minutes, the X-ray source will have produced at least a thousand times more energy than all the stars in this galaxy. But since the discovery of this source, we have I admit it a little difficult to understand its origin « .

Perplexed, the researchers nevertheless have a few hypotheses that could explain this cataclysmic event. Three, to be more precise. And of the three hypotheses put forward, two of them revolve around gamma-ray bursts (GRBs), known to date to be the brightest electromagnetic events in our Universe. These bursts can in particular be released during the collapse of a very massive star by the merger of two neutron stars or by the merger of a neutron star with a black hole. A third possibility is that a black hole simply shredded a white dwarf star.

But let’s remember, these are only hypotheses and none of these ideas correspond perfectly to the data collected. Using the Hubble and Spitzer telescopes, researchers were able to narrow down the source of the X-ray burst to a small galaxy about 10.7 billion light-years from Earth in a region of the night sky called the Deep Field of South Chandra, in the constellation of the Furnace.

Researchers now plan to analyze data from the European Space Agency’s XMM-Newton telescope and NASA’s Swift satellite to try to find any further evidence of a similar event occurring in the Universe that may have escaped the vigilance of the researchers due to their short duration of explosion.