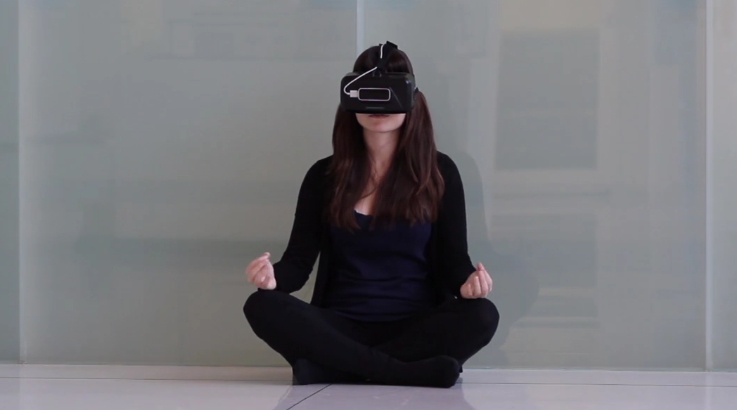 A Belgian researcher working at the Massachusetts Institute of Technology (MIT) has created a laboratory carrying out various experiments linking man and machine. This research integrates virtual reality and augmented reality in order to push back the frontiers of human senses.

Founder of the Fluid Interfaces laboratory at MIT, Pattie Maes believes that humans have two brains, the first being biological and the second digital. The researcher thinks that our smartphone should become one with our body in order to correct the “communication problems” existing between these two brains. The goal ? Allow the machine to understand our environment in order to suggest better experiences in real time. Ultimately, it is a question of arousing in man the appearance of a sort of sixth sense.

The Fluid Interfaces laboratory is currently conducting many experiments such as the one using an application called Psychic VR. It works with sensors built into the helmet to measure brain activity in the brain. The user is able to achieve things that are attributed in reality to the paranormal by the simple fact of his concentration.

Depending on the intensity of brain activity, the user can virtually rise in the air, move objects by thought (telekinesis), be capable of pyrokinesis (fire by thought) or even equip themselves X-ray vision to see through solid matter.

An experience called TreeSense allows you to enter the skin of a tree through a visual simulation coupled with electrical simulations capable of sensing the movements of branches, the presence of insects and birds, the circulation of the sap or even the sad end of many trees: the passage to the chainsaw.

Finally, a last experiment called Smile Catcher concerns a small object capable of counting the number of smiles people make in a day. This small device also sends you a sad smiley if you perform a « bad » action such as lighting a cigarette or starting a can of soda.

Here are the demonstrations of the Psychic VR and TreeSence experiences: