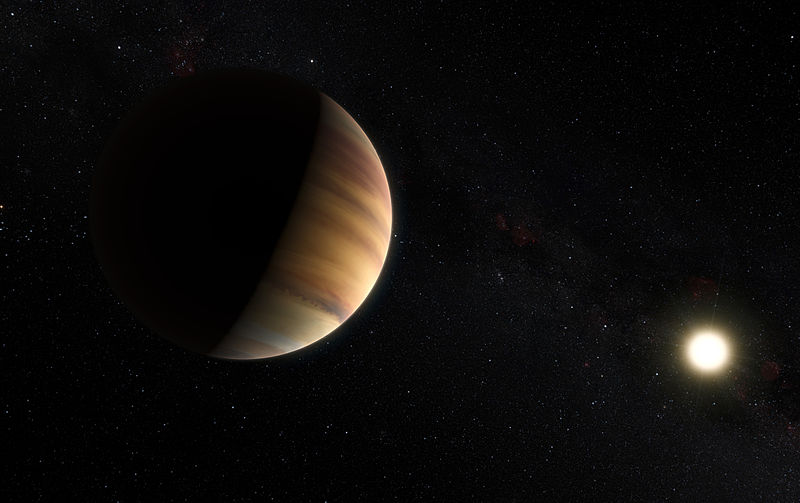 Astronomers have detected the presence of water molecules in the atmosphere of exoplanet 51 Pegasi b, a hot Jupiter located about 50 light years from Earth in the constellation Pegasus.

Nearly 22 years ago, Man discovered 51 Pegasi b, a hot Jupiter (orbital period of less than 10 days – 4.23 days here in this case) which has fascinated astronomers ever since. Half as massive and 1.6 times larger than our Jupiter, this exotic world will forever remain the very first exoplanet detected near a normal Sun-like star. The beauty was talked about again a few months ago after the planet hunter Harps allowed the very first direct detection of visible light reflected by the planet. Today, it is indeed water that has just been detected in the atmosphere.

In order to better understand this planetary system, a team of astronomers led by Jayne Birkby, from the Harvard-Smithsonian Center for Astrophysics, looked at 51 Pegasi (the host star) and its planet using CRIRES, a near- high spectral resolution cryogenic infrared installed on the Very Large Telescope (VLT) in Chile. They obtained a total of 42 absorption spectra. By analyzing the missing wavelengths, the researchers then detected water molecules in the atmosphere. The results, published on the arXiv website, provide important information about the nature of this planetary system. In addition to water, these researchers claim to have detected  » no molecules of methane or carbon dioxide at any significant level, indicating low atmospheric abundance « .

New observations will be needed to try to accurately assess the composition of the atmosphere of 51 Pegasi b. The study of the atmospheres of exoplanets pushes current instruments to the limit of their performance, but others could soon revolutionize science. We are thinking in particular of the James Webb Telescope, 100 times more powerful than Hubble, whose launch is scheduled for 2018. More than twenty years later, nearly 2,000 extrasolar planets have been confirmed. Among them, many hot “Jupiters” like 51 Pegasi b. Due to their sizes and masses, they are the easiest to find, but specialists believe that they are probably not as abundant as the rocky ones, which are more difficult to flush out.