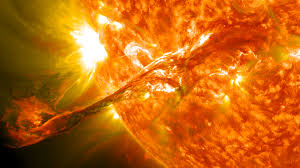 A team of researchers offers a novel solution to a mystery that has puzzled physicists for decades: how magnetic reconnection (a universal process that triggers solar flares, aurora borealis and other gamma-ray bursts) can occur so quickly without breaking the laws of physics?

The question is crucial and the answer could help researchers prevent solar flares that can interrupt communication on Earth or explain several high-energy astrophysical phenomena like gamma-ray bursts that can exterminate us without any warning. We already know that all of these high-energy phenomena occur through what researchers commonly call “magnetic reconnection,” a mechanism that abruptly converts energy stored in a magnetic field into other forms of energy. The mechanism occurs in almost all magnetized plasmas and therefore in almost all of the Universe. Only so far, physicists haven’t been able to figure out how it could kick in so quickly.

You can see a demonstration of magnetic reconnection below:

According to our current understanding, the process of magnetic reconnection takes place in thin « sheets » of plasma where the electrical current is highly concentrated. According to the classical theory, these sheets can be very elongated which is supposed to strongly limit the speed of the magnetic field lines which join and divide. Magnetic reconnection speeds are therefore an enigma and directly contradict theoretical predictions.

Researchers at Princeton University today present a detailed theory of the mechanism that could lead to this rapid reconnection. This new hypothesis is based on what the researchers call “Plasmoid instability”, which, vulgarly, means that sheets of plasma break up into small magnetic islands called plasmoids instead of being constantly linear. The researchers describe in their paper a slow linear phase that would then go through a period of quiescence before accelerating into an explosive phase that would trigger a dramatic increase in the rate of magnetic reconnection.

This new hypothesis has yet to be tested by independent teams, but given this study, we have never been closer to understanding the triggering of some of the most violent events in the Universe.