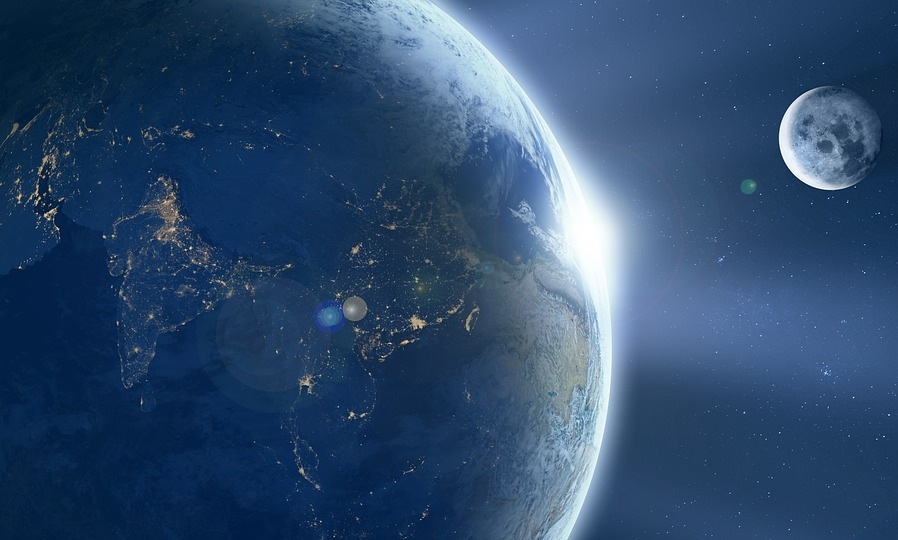 About 4.5 billion years ago, a body the size of Mars slammed into Earth, tearing off an arm and a leg, in short, nearly 8 billion cubic km of material from the Earth’s crust and mantle . The ejection materials then formed a ring around the Earth and then merged in a few million years to form the Moon. This is the generally accepted theory. But concretely, what was its influence on the Earth?

First, the stabilization of the Earth’s axis of rotation. We know that, without the Moon as a catalyst, the axis of rotation of the Earth would be upset; the poles would thus wander over the surface of the globe, irremediably modifying the fragile balance of the biosphere. The incline may change over time. Nothing serious, all the planets do it. The most complicated is when this change becomes brutal. What if Antarctica pointed towards the sun 24 hours a day, plunging North America and Europe into permanent darkness? What if everything suddenly turned upside down? Coupled to the Moon, the axis of rotation of the Earth is then stabilized as a spinning top can be with a gyroscope. We take the long-term regularity of our seasons for granted, and we should thank the Moon for that.

Without the Moon, would you have been able to fish for the cockle, dipping your hand in the mud at the slightest sign of presence? No. More seriously, our dear satellite, by causing high tides on Earth, slowed down the Earth’s rotation through the mechanism of tidal friction. Without the Moon to stabilize its rotation, the Earth would have a much faster rotation period, on the order of 15 hours/day. By slowing down the Earth’s rotation period, the Coriolis forces are less strong at the equator and prevent the formation of high-speed winds, of the order of about 350 km/hour, which would sweep the biosphere. Without the Moon, storms would be both more numerous and more destructive. Goodbye hulls, then.

Thanks to the Moon, coastal marine habitats and swampy regions were able to emerge, allowing life to be born and develop. Yes, like cockles.

Presented by Hubert Reeves and Jean-Pierre Luminet, DU BIG BANG AU VIVANT is a TV-Web-cinema project that covers the most recent discoveries in the field of cosmology.