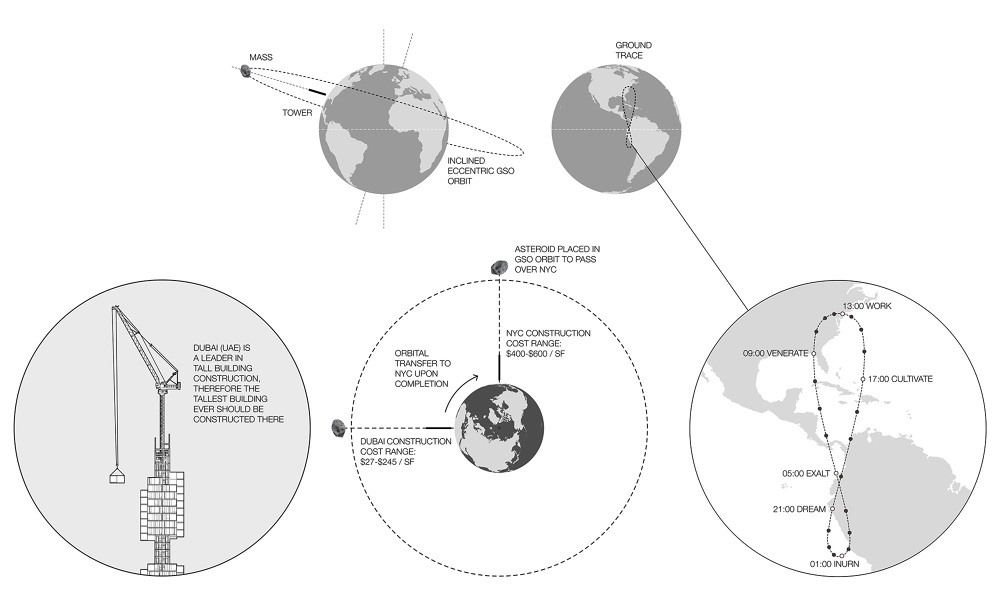 An American architecture firm recently unveiled a totally crazy project: a skyscraper attached to an asteroid placed in orbit around our planet.

Asteroids have fascinated researchers for a long time and NASA recently validated a very ambitious mission. This is to intercept an asteroid 200 kilometers in diameter in order to exploit its mineral deposits which would be composed of gold, platinum, steel and nickel. The estimated value of the loot is astronomical (it is the case to say it): ten thousand million billion euros!

This mission called Psyché will begin with the launch of a space probe in 2023 which will place itself in orbit around the celestial body from 2030 in order to collect data on the process of its formation. The asteroid giving the mission its name is believed to be the ferrous core of an ancient protoplanet resulting from a violent collision with another object.

While Luxembourg also wants to get into the drilling of asteroids, it is clear that these bodies are more fashionable than ever. It is in this context that the New York architecture firm Clouds AO worked on its incredible project called Analemma Tower.

Experts have imagined the construction of a skyscraper suspended upside down from an asteroid which would therefore have been previously “captured” and placed in orbit approximately 50,000 kilometers from Earth. This is a distance much greater than that at which the International Space Station (ISS) is located, fluctuating between 350 and 400 kilometers in altitude.

The Analemma Tower project is abundantly detailed and even provides for several scenarios. According to Clouds AO, the asteroid in question could for example be placed in an eccentric geosynchronous orbit with the aim of circulating by tracing a loop between the northern and southern hemispheres of our planet every day (see below).

Even if the project is totally unfeasible today, the architects still thought of everything, especially the energy supply. This will come from solar panels installed directly above the atmosphere for better exposure and optimal energy collection. The issue of water was also raised. This resource will be filtered and recycled within a closed circuit system also fed by rainwater.

This completely original skyscraper should be composed of residences, office areas and shops in order to acquire a certain autonomy. Obviously, living in such a place will not involve going to Earth every day! It’s a crazy and impossible project, but you never know! In any case, the Clouds AO studio likes to work on eccentric projects, as was already the case in 2015 with works imagining Martian dwellings.