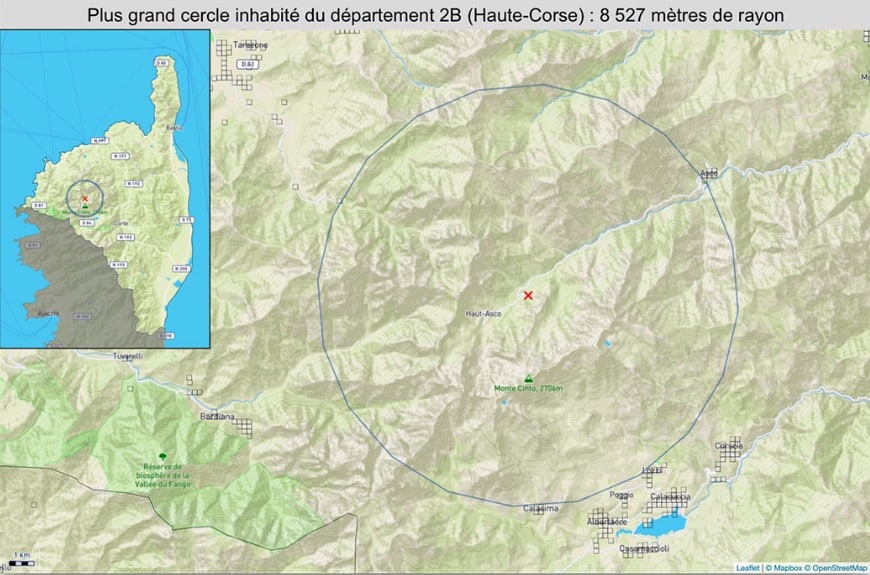 We are far from the great North American spaces, but in France, it is sometimes possible to isolate oneself completely. What is the largest most isolated space in our country? Here are some maps by department, showing real « lost holes »!

The Datamix site had succeeded in materializing the “France of the void” thanks to data from INSEE, as well as an original methodology: the division of the French territory into squares of 200 meters on each side. Thus, this document valued the areas empty of inhabitants. This way of doing things has been taken up by the Slate site, as part of the visualization of the largest empty areas for each department.

Only the largest uninhabited circles for each department have been kept. The palm of the largest « lost hole » in France was won by Savoie (73), with a circle of human vacuum 9498 meters in radius located in the middle of the Vanoise park, between two glaciers.

Then, logically, we have mountain areas, such as Monte Cinto (Haute-Corse), the area of ​​Ax-les-Thermes (Ariège), as well as the Néouvielle massif (Hautes-Pyrénées) and the south of the Parc des Ecrins (Hautes-Alpes). There are also quite special cases, whose empty circles are military camps such as Canjuers (Var), Suippes (Marne), Saint-Cyr Coëtquidan (Morbihan), or Souge (Gironde).

Other cases are forest areas such as the forest of Chaux (Jura) or that of Brocéliande (Ille-et-Vilaine). In the Meuse, it is an area of ​​municipalities known as « dead for France ». Indeed, six villages were destroyed during the Battle of Verdun in 1916 and never rebuilt.

Here are the 12 departments with the largest human void area:

Here are also the three departments with the smallest empty circle of inhabitants: