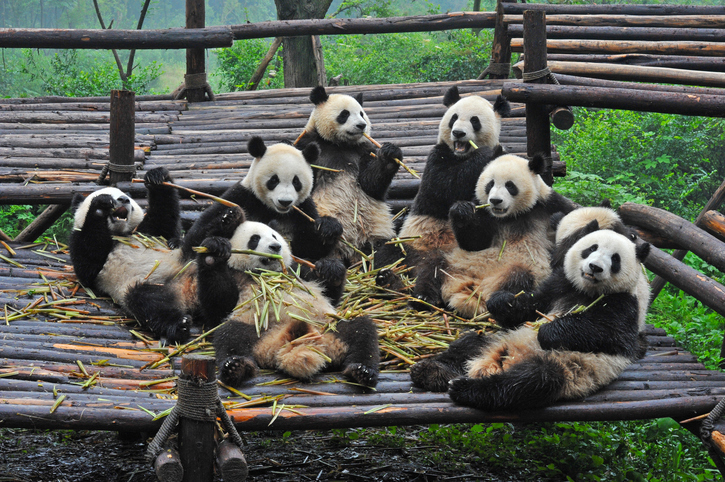 Why is the giant panda black and white? The question seems simple as we are used to the animal which arouses a lot of empathy and compassion. Yet, until now, there was no response. But a recent study by American researchers gives us some answers.

The coloration allows a whole series of tasks in the animal kingdom such as attracting females, warning predators or blending into the environment. To understand why organisms display particular colors or patterns, biologists often compare them with species with similar patterns/colors that occupy the same niches in different environments. For example, similar black spots line the coats of leopards (in Africa and Asia) and jaguars (in the Americas) despite their diametrically opposed geographical position, and these spots help break up their outlines when they stalk their prey. But the problem with pandas is that they are rather unique.

While contrasting stripes and spots are common in the animal kingdom, the panda is black and white. Mainly made up of white, he wears on the other hand the ears, the legs and the contour of the eyes black. But why ? Two teams of researchers from the University of California and California State University worked together to try to unravel the mystery by comparing each distinct area of ​​black and white with the colorations of 39 bear subspecies as well as 195 other species. of carnivores paying particular attention to their specific habitats.

The approach here is different, the biologists have treated each part of the body as an area independent of the others for the case of the panda. Seen in this way, it would seem that the panda evolved in such a way as to blend into two different environments found in the mountainous regions of central China where it lives, allowing it to communicate with its friends and avoid its enemies. Unlike their more carnivorous cousins, pandas have a vegetarian diet based on bamboo shoots which are not the easiest foods to digest although they are plentiful.

Pandas then compensate by limiting their movements, but contrary to what their appearance might suggest, they are unable to « store » enough fat to sustain the winter months. This means that pandas have to stay active all year round, deal with frost and snow, and find enough food to meet their energy needs. According to our researchers, having a belly and a white head allows the animal to blend in with the pristine surroundings to avoid snow leopards and other jackals. Dark « socks » and « sleeves » on the other hand would allow them to hide in the shade of tropical bamboo groves during the warmer months.

Regarding the outlines of the black eyes and ears, the researchers hypothesized that these could be used to communicate with other pandas, especially in competition for the availability of territories. A few years ago, this same team of researchers had argued that the stripes of the zebra made it possible to deceive flying insects by offering them protection against the scourge of biting insects.