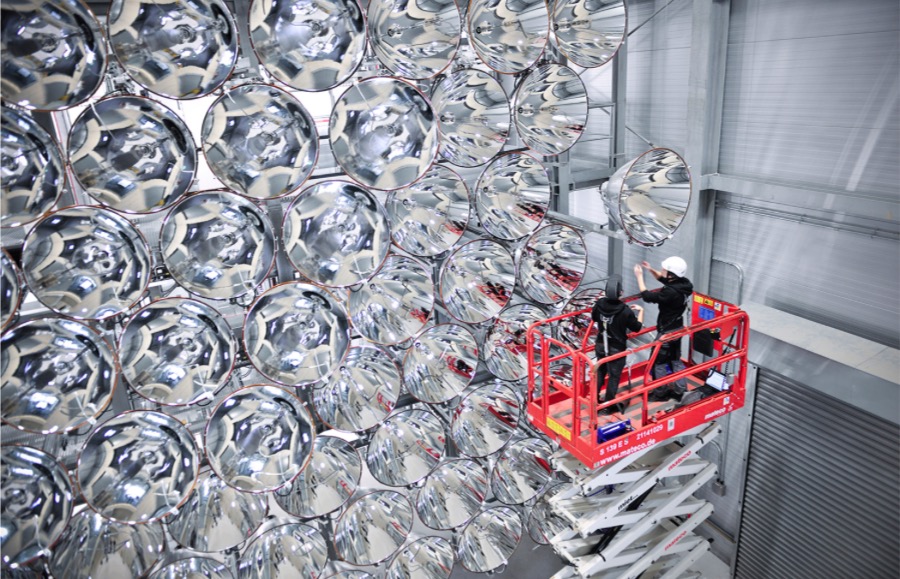 German researchers « lit » this Thursday the largest « artificial sun » in the world. It is a collection of 149 projectors capable of generating light 10,000 times more intense than the Earth’s natural light.

Welcome to the German Center for Aeronautics and Astronautics located in Jülich, a town about thirty kilometers from Cologne. You will find there the largest « artificial sun » in the world: a device comprising 149 projectors which each have about 4,000 times the power of the average light bulb, all capable of generating light whose intensity is 10 000 times greater than that of natural light. Here all the lamps are directed at one and the same point, the temperature of which can reach 3,500 degrees Celsius.

This gigantic honeycomb structure bears the official name of “Synlight” and uses short-arc xenon lamps normally used in cinema to reproduce natural light. In particular, it enables the testing of new methods for producing hydrogen, which is considered by some to be the fuel of the future since it does not produce polluting emissions, which means that it does not contribute to global warming. But while it is abundant in the universe, on Earth hydrogen must be made by splitting water into its two components (the other being oxygen).

Only to produce hydrogen in large quantities, it is necessary to recycle billions of tons of water, which requires considerable energy expenditure that « the artificial sun » could easily provide in the long term according to German scientists. In four hours, these devices spend as much electricity as four people in a year, but in the future they could use solar energy. Every day, astronomical amounts of solar radiation indeed flood the Earth, but although we already have ways to harness the sun’s energy such as through solar panels, much of this energy still remains untapped.

Thanks to this device, the researchers therefore hope to be able to tap into this wasted energy. The researchers believe that once mastered, this hydrogen production process could be increased tenfold to give it an industrial scale in about ten years.